Ah, September. Who cannot love this month? The air is getting crisper, football has begun and the MLB playoff picture is shaping up. If teams do not blow 4-6 games leads with 10 games left, then here is an early look at divisional round match-ups:

^Atlanta will most likely finish with the same, if not a better record than Arizona, but since Hot Lanta plays in the East, they will have to settle for the Wild Card.

^St. Louis can also creep in if Atlanta collapses….but I do not see this happening. ATL’s pen is too strong.

Arizona (92-70) – By far Arizona has the easiest end of season schedule of any club in the playoff hunt facing Pittsburgh and the Dodgers. However, look for San Fran to throw their big three at them and perhaps make up some ground and possibly win the west. Hopefully ‘Zona does not let this happen and they reveal the Giants for who they really were last year: A fluke, a one-hit wonder and a garbage hitting squad who got hot.

Philadelphia (106-56) – With the most games still to be played, look for the Phils to finish with a franchise record of wins. But sorry Philly, even though I have you winning the last 8 of 12, I think you will fall short of the milestone 108 wins. But who cares, you will rest your guys and come out strong in the playoffs

Milwaukee (96-66) – Look for the Brewers to finish strong with a sweep of Cincy today and finishing their season strong with series wins @ Cubs and vs. Florida and Pittsburgh.

Atlanta (92-70) – Hot Lanta should finish the year with a split in wins. Even though they play the Nats and the Marlins, look for them to loose one of those series. The Philly series is a toss up. I’d love to say Philadelphia will take 2 of 3, but the last series of the season could see players rested. Atlanta will also work hard for that final push to make sure they lock up the Wild Card.

These two teams have split their decisions in the regular season, with strong home performances by Arizona’s Kennedy and Saunders. However, when the the D-Backs came into Philadelphia, they picked up a big win against Roy Toy Halladay, but their big two mentioned previously could not get it done. Look for the fans and the Philly October chill to be a factor in this one.

Surprisingly, Atlanta is 5-3 in their meetings with the Brew Crew this year. However, these games were all played before May 6th, where the Brewers went a dismal 16-18. Now they have not only two MVP candidates in Fielder and Braun bu 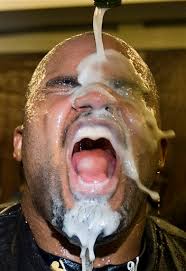 t Greinke is in the running for the NL Cy Young. If the Brewers can get ahead early and stay away from that Atlanta pen, they should have no problem in a sweep of the Braves.

*Jurrjens will more than likely not return for the end of the season.

Come back soon and check out Mr. K’s entire National League play-off predictions when each team is locked in a spot.

Follow Team Voodoo
Mike Angelina @MikeAngelina 1.0905665588534 year ago
@MongoGoesInsane @UpstateCourier so you want the Yankees to have to play better teams more times just to make it mo… https://t.co/8LSt98ojAF
CJ Sullivan @CJSullivan_ 4 days ago
I mean, Lady B thru Z is available.
20
Darren DeGaetano @DarrenDegaetano 2 hours ago
RT @TimAlberta: No one tweet can capture the intellectual decline of the American right, but this one comes close.
1.4K
Mike Procopio @mikeprocopio 13 days ago
@WayneParryAC This is banana land. How much longer does the no indoor-dining go on for? I'm supposed to be down J… https://t.co/tYqA6rXyC2
Mike Procopio @mikeprocopio 15 days ago
@ShiriSpear Insane, I’ve yet to see a drop of rain in Saugus!
CJ Sullivan @CJSullivan_ 4 days ago
@theeclarkjones Best part was, I had to bring a player with me to get my ride released, because I was "riding dirty… https://t.co/rup8X8qJjJ
2
Darren DeGaetano @DarrenDegaetano 2 hours ago
Week 1 of 2 softball camp weeks started today. I cannot express enough how amazing I feel watching my daughter pla… https://t.co/lK5BCo6nb8
3
Mike Procopio @mikeprocopio 15 days ago
Panthers former QB to Pats Pats former QB to bucs Bucs former QB to Saints Saints former QB to Panthers Welcome to 2020
5
Darren DeGaetano @DarrenDegaetano 1 hour ago
@ForzaCorrado @ThatEricAlper Yes. Yes. Yes. 1000x, times yes, my friend.
CJ Sullivan @CJSullivan_ 2 days ago
Well, this is it. I can either abandon Twitter now, or find out what this cake shit is about and be stuck on this hamster wheel forever.
2