Thus far, the playoffs have been known to cause laughter, fear, joy, anxiety and RAGE! You wanna rage on baseball, television programming, how assholes drive, corporate America? HELL YESSSS…… 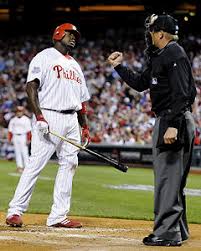 COME ON DUDE! I know it is already old how many people are hating on you but I am going to do it anyway. EVERY TEAM has the same approach with you – first pitch fastball, you take. second pitch slop, you swing. The rest of the count is outside slop that you can’t just foul off like other professional hitters do. ADJUST god damn it…you are paid 25 million a year –  yes you earn it in regards to RBI’s/homers for the season and yes you were clutch early in the ALDS and were a huge reason a trophy came to Philly in 2008….BUT for f*ck sake – do not strike out ALL THE time in the playoffs. Foul it off, ground out, something!! AND you are doing it l00king non the less!!?? Then you shake your head like you did not know it was coming..backward K’s all day and I am tired of it…..

Well, the Phils really out did themselves this year on the quality of their playoff tickets. I have been a partial season holder now for 5 years and my regular season tickets look awesome (I’m a big keeper of the ticket kinda guy, makes for a good memory/free souvenir). Each year my playoff tickets are pathetic, just some

cheap strip of crap with the game and TBD written over a cheap background. Now, I did not think they could get any worse than that but this year they did…Literally looks like they were typed on a typewriter over a background barely visible that was marked with a colored pencil…why don’t you just send me a piece of notebook paper, written in crayon “Phils vs someone, Home Game 1”….HORRIBLE!

I always knew people were stupid, but being on the road with some of these morons really proves it. Is it necessary to jam your breaks on when you see a blinking light, extra median, construction off to the side? What the hell are you looking at? ooooooo ahhhhhh, there are men at work on the side of the road, tonka trucks, bull dozers; EXCITING…drive your god damn car before you kill someone! Using your breaks when no one is in front of you for 50 yards? yeah, that’s smart – – remind me to never buy pre-owned.

Can you get any worse? I always knew reality tv was a definite killer to the brain much like crack, coke, heroine, hashheeesshh, ecstasy, huffing and other dumb shit you can find that makes your brain jelly l

ike. “Regular” programming is getting just as bad. You see this new show, Terra Nova? WOW, CG images that were made with an Atari and acting that is terrible to boot…next week’s premise: there is a disease that makes us forget who we know. Oh shit, I’m clinging to the edge of my seat, I better tune in…TERRIBLEÕ

So, big banking couldn’t simply take their 3% fee on credit and the diminished 1.5% fee on debit and ride away in the sunset with their extra billions to do absolutely dick. BOA had to enact a $5 debit use surcharge each month on their debit cards. WHAT A JOKE – if I was a customer of theirs I would leave ASAP….

I have overdraft protection on my checking account. Well, last month I decided to say screw it, my check book is all messed up from the summer, let’s ride this bitch to 0 and anything that goes over will be covered by my overdraft from my savings (which, FYI, my savings is run by the same bank who handles my checking). Well, well what do you know, Saturday morning I am checking my bank statements and a charge of $12.50 was processed due to “overdraft protection fees”. I of course call and speak to someone who is not really good at the English language spoke here in America (they were from Allentown, supposedly) and after a long, long, long conversation, she reimburses half the fee. FINE, I say – I shall call on Monday when I can get a 9-5 on the phone…

Monday rolls around, call, the gentlemen was as nice as can be but he says he can’t reimburse me any more $ because half the fee has already been received. If nothing happened Saturday, he could have maybe given me it all back…hmmmmmmmmm I say, then proceed to tell him what a JOKE this bank is, the lady from Saturday and question on why it costs 6.25 per overdraft to get money out that is in your own bank? I used this analogy, “So, you are sitting at a desk and you see your one hand is empty (my checking), so you look at your other hand (my savings) and it is overflowing with dough, you then take your empty hand and pick out what you need from the overflowing hand to now fill up your once empty hand. Yeah, that sounds like it should be $6.25, especially when a computer did it for you”…knowing how fed up I was, he sends me to a local branch manager over on Germantown Pike (in Plymouth Meeting, PA – if you are familiar)…this chick says she is busy so she will call me back later. how about 1 sir? I say, FINE….

……..yep, no call back in 2 days. haha – I laugh this day, out loud…really jamming it up me you know? So I call back, explain this whole thing again and the lady literally did not care – literally, no emotion, no give a shit…y 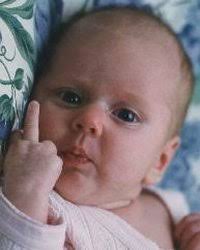 We gotta stand up people..or we will continue to be JAPED the shit out of…in the end, WELLS FARGO will not be having me as a customer ever again, mortgages, future loans, nada……

This is how I explained it to a few colleagues of mine at work, “Why do I have over-draft protection when I have to pay fees anyways? I am not protected at all. It’s like putting on a condom, taking a few swings and then taking it off, and continue what you were doing. What’s the point?” …yeah that joke works the other way around too, start with it off, then……

ON A LIGHTER SIDE:

– That squirrel who waves in the “$5 AnyTober WaWA commercials” makes me chuckle ever time! hahahha….it’s on right now!

– Victorino’s attempted throw the other night from center was pathetic but yet laughable, one of

the funniest things I’ve seen since Pat Burrell fell on his face making a throw from left – obviously in classic Burrell fashion he was hung over from the night before.

– In one of the earlier Tampa/Texas games a homer was hit to the grass in center field. Before you could say Cowabunga, a fan was there with the catch and the immediate throw back onto the field…it was funny to watch, especially because he was a slob.

Well, I hope you enjoyed….be prepared for the Phils Game 5 @ the Bank tomorrow! I will be in LOT K by 4 pm. SEE YA THERE!